The Filhos de Bimba Escola de Capoeira (FBEC), is located in the historic centre of Salvador da Bahia, the Pelourinho. It was founded on June 10, 1986 by Manoel Nascimento Machado, known as Mestre Nenel. Mestre Nenel is continuing the work of his father - the famous Mestre Bimba, creator of Capoeira Regional - through the preservation and continuation of the methodology, principles and traditions laid out by his father. The FBEC also has several centres and schools located in other neighbourhoods of Salvador, as well as in other cities in Brazil and around the world. 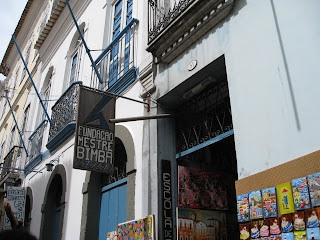 Manuel dos Reis Machado (Mestre Bimba) was born on November 23, 1899 in the neighbourhood of Brotas, Engenho Velho, city of Salvador da Bahia. The son of Luís Candido Machado, a famous batuque player, and Martinha do Bonfim, he was to become one of the most well-known and revered men in Bahia.

At a time when capoeira was still marginalized, Bimba exercised various professions, but he also excelled in capoeira. Due to the intense persecution that capoeira practitioners experienced, it became obvious to Bimba that the art form was dying. As it was becoming increasingly folkloric, it was also losing its original fighting aspect. A man ahead of his time, Bimba envisioned a renewed capoeira and he set out to make these changes, transforming the old capoeira into what he called the Regional Bahiana. Drawing from his skills in this old capoeira and in Batuque (which he learned from his father), Bimba created his new style of capoeira, believing strongly that it could become as respectable as the other martial arts that had come to Brazil from Asia. In 1932, Mestre Bimba founded the first ever capoeira academy in Enhenho Velo das Brotas and also continued teaching in peoples’ homes. On June 9, 1937, Bimba officially registered his capoeira school with the Secretary of Education, Health and Public Services - his became the first legitimate academy of capoeira in Brazil. Bimba eventually taught capoeira in the military, and then, in 1942, he opened his second academy.
It was on July 23, 1953, when President Getúlio Vargas watched a capoeira presentation at the Palace of Acclamation and declared it - “the only true capoeira” - a national sport, that Bimba’s capoeira entered a new phase. Mestre Bimba’s capoeira quickly gained notoriety - he had his share of critics, many of them from the older practitioners of capoeira who criticized Bimba’s creative initiatives. He was denounced as having “whitened” the art of capoeira and thus betrayed its past. Ironically, Mestre Bimba was well-versed in Afro-Bahian culture, having drummed in the Afro-Brazilian Candomblé houses for many years and having married a mãe de santos, the head of a Terreiro. He revived many of the folkloric dances that were being left by the wayside, such as maculêlê, puxada de rede and samba de roda, taking pride in the Afro-Bahian heritage and presenting them to a middle and upper class public for the first time. Today, almost every academy practices one of these art forms and presentations are common, thanks to Bimba’s efforts.
A gifted berimbau player - some say one of the best in Bahia - Bimba stressed the importance of music in capoeira, both in the creation of the roda and in the games themselves. The move away from music in modern day capoeira (often referred to as Regional, but more accurately described as a Contemporary style) is a consequence of the changes brought about by some of Bimba’s students and their descendants, and does not reflect his own philosophy.
Thanks to Mestre Bimba, capoeira took off in Bahia and eventually expanded to the rest of Brazil, where it had been erased through persecution. The old form of capoeira also benefited from Bimba’s work, as it forced its old adepts to come together and to attempt to define their art from. The term “Capoeira Angola” began to be used, replacing the more common terms “Vadiacao,” “Brincadeira de Angola,” or simply “Capoeira.”
In 1973, Mestre Bimba moved with his entire family to the state of Goiás, a very controversial decision, and one which he took in bitterness, feeling that the authorities in the state of Bahia did not recognize the worth of his work. Sadly, his expectations in Goiás were not met and he and his family struggled with poverty. Mestre Bimba died of a stroke on Feburary 5, 1974, undoubtedly brought on by his great sadness.
Mestre Nenel 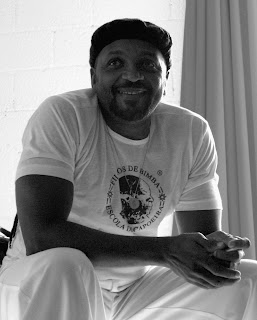 Manoel Nascimento Machado (Mestre Nenel), was born on September 26, 1960 in the neighbourhood of Nordeste de Amaralina, city of Salvador da Bahia. The son of Manoel dos Reis Machado (Mestre Bimba) - creator of Capoeira Regional - and Berenice da Conceição Nascimento, he was raised by Alice Maria da Cruz (known as Mãe Alice).
As a young child, Nenel spent many of his days in his father’s capoeira school, the Centro de Cultural Física Regional, located in the Laranjeiras Antigas neighbourhood. It was here that he took his first steps in capoeira, graduating in 1967 with many of his brothers. Mestre Bimba had begun to use capoeira in a way that differed dramatically from his predecessors: he saw it as an educational practice that could help children become respected adults with a place in society. This idea was revolutionary at a time when capoeira was equated with a poor, marginalized population of predominately black men. Mestre Bimba’s example was followed by many others who grasped its educational potential, and capoeira enjoyed a surge of popularity as it was brought into the larger society.
In 1972, Mestre Bimba and his family moved to the city of Goiânia in the state of Goiás. This move was to the great sorrow of many Bahians who had considered Mestre Bimba a national hero. Mestre Bimba died in Goiânia on Feburary 5, 1974. Although some of his former students continued teaching in Brazil and abroad, they had begun to follow their own capoeira paths, adapting and changing Mestre Bimba’s Capoeira Regional to suit their own needs. Mestre Bimba’s work was not taken on by anyone for a long time. Nenel, like many of his brothers and sisters, worked in many different occupations trying to make ends meet. Then, in 1975, he heard the call of capoeira. Despite many difficulties, Nenel moved to Brasília where he founded his first academy, the Associação de Capoeira Regional Mestre Bimba Filho.
Nenel returned to Bahia in September of 1977 and began competing in capoeira championships, as well as playing street capoeira and performing in folkloric shows, even as he continued working various jobs. Then, in 1984, he was given the job of administering classes at Mestre Moise Sucuiba’s academy in the Vale das Pedrinhas neighbourhood. During those two years, his desire to found a new academy entirely committed to the preservation and promotion of his father’s work was born. His vision finally became reality when, on June 10, 1986, he founded the Filhos de Bimba Escola de Capoeira based in the Fitness Academy of Genivaldo Garcia, neighbourhood of Amaralina. In 1989, Nenel was invited to participate in an educational project at the School of Arts and Trades, where he transferred the Filhos de Bimba school. Many of Mestre Bimba’s old students began rallying around him, answering his invitation to work together to preserve Bimba’s Capoeira Regional. Mestre Nenel’s work began to take off as he gained recognition both in Brazil and abroad as a reference for Capoeira Regional.
Mestre Nenel is a founding member and currently presiding over the Fundação Mestre Bimba, which was created on November 30, 1994. A skilled berimbau player, he offers music courses with the aim of preserving much of the rich musical inheritance of Capoeira Regional, an inheritance which was in the process of being lost. Through the creation of various social projects aimed and children and adolescents, such as the Projeto Capoerê, in which children from poor neighbourhoods are offered free capoeira classes, Mestre Nenel has continued the educational work begun by his father. Many of his current professors, now young men and women, were once students of the Projeto Capoerê. They continue Mestre Bimba’s teachings and the message of hope and dignity.
Our Professors 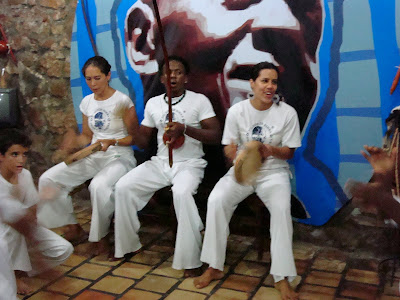 Professor Anum (Ricardo Santos de Jesus)
In December of 2004, when Lang entered the mother school of Filhos de Bimba located in the historic centre of Salvador da Bahia, she met Professor Anum – the person who would become her teacher and from whom, aside from Mestre Nenel, she would learn the most about the Regional philosophy, practice and way. Anum started capoeira in 1998, after joining a social project entitled “Projeto Capoerê”. When Lang met Anum in 2004, he had recently graduated and been voted best capoeirista of the year. Anum had overcome great odds in his personal life to become the teacher he is today and his passion for and dedication to Capoeira Regional inspire Lang and her students enormously. Presently, Anum and his partner, Professora Chapinha (Roberta) are in Lebanon continuing the important work of the Filhos de Bimba.
Professora Chapinha (Roberta Cecília Meireles Santana)
Professora Chapinha has also been very influential in Lang's capoeira experience.  As one of Lang's only female instructors in all of her many capoeira years, as well as being a dedicated, passionate and skilled capoeirista, Chapinha greatly inspired her. Chapinha started capoeira in 2001 and after training in different schools she discovered the Filhos de Bimba through her uncle, a student of Mestre Bimba, in the year 2002. In 2008, she graduated as a Professor of capoeira. Presently, she is teaching capoeira and Brazilian dance with her partner, Professor Anum, in Lebanon.
Professor Berimbau (Edvaldo Azevedo de Jesus) 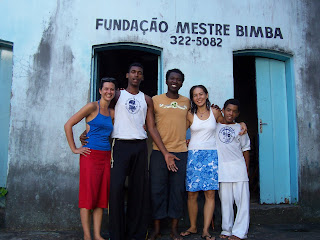 Another important influence in Lang's experience at the Filhos de Bimba has been Professor Berimbau, who taught her capoeira for several months in 2005. A person of unique integrity and generosity, he is well loved by the children and adolescents whom he teaches in Salvador’s Naranjiba CSU (Centro Social Urbano). Recently, he has also begun teaching capoeira at the OFSJ (Organização Fraternal São José) in Boa Viagem, Salvador through a capoeira programme for disadvantaged youth. This programme was launched in 2009 with the financial support of Filhos de Bimba Toronto.